I’ve been working on a new game aimed at the casual gamer. It’s actually based on something on my phone, but I thought it would go well on PC, and with a face lift.

What I’m doing though is taking the very simple game idea, expanding on it and adding some real graphics to it, rather than simple coloured circles. They don’t seem to have done much in recent years, so I can’t see them causing problems. And I’m sure there must be a few other clones out there somewhere.

Anyway, this is how my version looks right now: 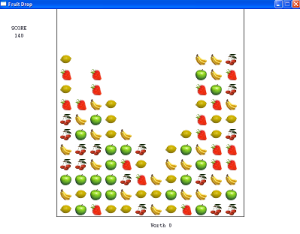 It looks much better when you’re sat playing it. I’ll post a working version of it in a few days. Just need to get some animation and some kind of user interface put together for it first.