I’ve taken the plunge and installed CyanogenMod on my Galaxy S2.

I am currently running the nightly build #47. It’s very stable so far. I got the rom from here: http://www.cyanogenmod.com/devices/samsung-galaxy-s2

Although on checking the Cyanogenmod website now I see that there’s a stable ROM available as of the 10th of October 2011. I can’t see it being much different to the one I’m running now though as mine is only a week old.

The phone boots up faster, everything is much smoother. I can now clock the CPU up to 1600Mhz, which gets me over 4500 on Quadrant.

It uses ADW launcher as the default launcher, which works really well and never goes jerky.

You don’t get Google services as standard, so you have to install these separately, I used Rom manager to do this.

I do get the odd random crash, and have had to hard reset the phone when this happens (hold down the power button for ten seconds). The phone has also restarted itself once or twice without warning. Also, the music players wouldn’t open at one point, but a restart fixed this (standard music app and DoubleTwist).

Compared to the Stock Samsung Rom, it definitely boots faster and works smoother. As for battery life I can’t say as yet I’ve not done any testing on that.

Cyanogenmod has a couple of nice extra features you don’t get with Stock Android. The first of these is “Permission Management”. This enables you to remove individual permissions from applications, like being able to access the internet, or access to contact data and phone details.

The other feature is “Phone Goggles”, which from what I can see is like a safetly measure to stop you using your phone when you’re drunk to send drunken texts or make phone calls to people you might regret, it has a setting to ask you math problems before it will dial.

I’ve added some screen shots below to show my current look for the Rom. 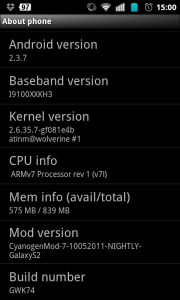